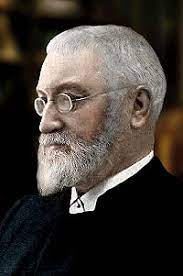 Ethelbert William Bullinger (December 15, 1837 - June 6, 1913) was a Vicar of the Church of England, Biblical scholar, and dispensationalist theologian. Born in Canterbury, England, his family traced its lineage back to the noted Swiss reformer Heinrich Bullinger (1504-1557). He was educated at King's College, London, and gained recognition in the field of Biblical languages. E.W. Bullinger was noted broadly for three works: A Critical Lexicon and Concordance to the English and Greek New Testament (1877); for his ground-breaking and exhaustive work on Figures of Speech Used in the Bible (1898); and as the primary editor of The Companion Bible (published in 6 parts, beginning in 1909; the entire annotated Bible was published posthumously in 1922). These works and many others remain in print (2004). In 1881, four years after the publication of the Lexicon and Concordance, Archibald Campbell Tait, Archbishop of Canterbury conferred upon Bullinger a Doctor of Divinity degree, citing Bullinger's "eminent service in the Church in the department of Biblical criticism."