Seed of the Woman

The promise of the savior through the seed of the woman begins a unique battle that will be waged by Satan to destroy the savior. It begins with Cain who slew Able (Genesis 4:1-12). From there, God brought forth the next righteous line through Seth. Satan then tried to contaminate mankind with Angelic cohabitation with humans thereby tainting all of mankind except for Noah and his family . Consequently, God brought forth the flood and saved the only family left that Satan had not corrupted. After the flood, the battle continues all the way until Christ was born and grew to fulfill His miinistry. The seed of the woman promised to Eve did provide the savior but it wasn’t until 4000 years later that this prophecy was fulfilled.

The mystery (secret) of Christ was revealed in the seed of the woman as well (Gen. 3:15). “Now to Abraham and his seed were the promises made. He saith not, and to seeds, as of many; but as of one, and to thy seed, which is Christ (Galatians 3:16). Obviously, Galatians is the proof text, and its fulfillment. The progressive revelation about the “seed” proceeds throughout the Old Testament, and is well demonstrated in Satan’s wiles, as he seeks to destroy the seed. The trail of this old serpent is well marked, and his attempts are legend. (for more information about the mystery of Christ, go to the Mystery Papers on the Secret of Christ as is now revealed).

The irruption of fallen angels in Genesis 6 was another attempt by Satan to prevent the coming of the Seed of the woman foretold in Gen. 3. 15. If this could be accomplished, God’s Word would have failed, and his own doom would be averted.

As soon as it was made known that the Seed of the woman was to come through Abraham, there must have been another irruption, as recorded in Gen. 6. 4, “and also after that” (i.e. after the days of Noah, more than 500 years after the first irruption). The aim of the enemy was to occupy Canaan in advance of ABRAHAM, and so to contest its occupation by his seed. For, when Abraham entered Canaan, we read (Gen. 12. 6) “the Canaanite was then (i.e. already) in the land.”

In the same chapter (Gen. 12. 10-20) we see Satan’s next attempt to interfere with Abraham’s seed, and frustrate the purpose of God that it should be in “Isaac.” This attempt was repeated in 20. 1-18.

This great conflict may be seen throughout the Bible, and it forms a great and important subject of Biblical study. In each case the human instrument had his own personal interest to serve, while Satan had his own great object in view. Hence God had, in each case, to interfere and avert the evil and the danger, of which His servants and people were wholly ignorant.

The following assaults of the great Enemy stand out prominently:

At length the cross was reached, and the sepulchre closed; the watch set; and the stone sealed. But “God raised Him from the dead.” And now, like another Joash, He is seated and expecting (Heb. 10. 12, 13), hidden in the house of God on high; and the members of “the one body” are hidden there “in Him” (Col. 3. 1-3), like another Jehoshaba; and going forth to witness of His coming, like another Jehoiada (2 Chron. 23. 3).

You may view this from the Overview of God’s Revealed Plan and Hidden Purpose chart.

Be sure and read more from the section on Noah and the Flood. 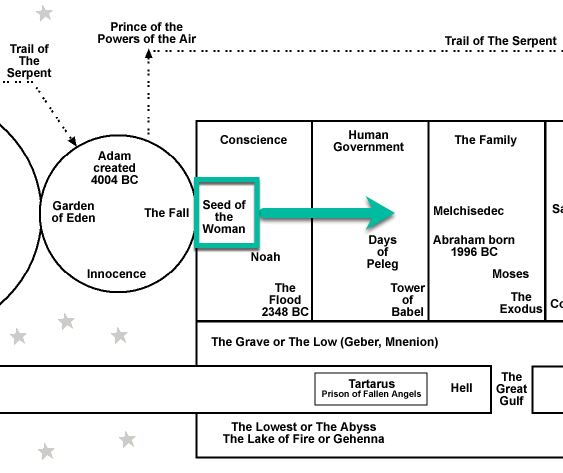 Use the buttons above the chart to zoom and pan. Click the lock button to lock the chart in place. Click the reset button to reset the chat to its original spot. Click and drag with your mouse to pan.

< Go back to charts