The writings of the author CH Welch have been and continue to be a tremendous influence on those who look for dispensational truth. One of his great and influential contributions is the doctrine concerning the “dispensational boundary of Acts 28”.  Over the years I have also relished the consequences of this doctrine because it brings light and explanative power to the teaching of God’s word rightly divided. Let me be clear — this doctrine basically says that Acts 28:23-31 is a dispensational landmark containing a boundary. On one side is the hope of Israel and on the other, the revelation of the mystery and the commencement of a new age with Israel divorced and lo-ammi.

As I have discussed in other blogs, articles, and studies — it has become clear to me that the context of Acts 28 demands a slightly different conclusion. To see this it is useful to reframe the timeline in terms of the wedding invitations sent in Matt.22:1-13. The major divisions then become clear — the date AD 70 fits the beginning of the invitation to guests because this is when the city was burned Matt. 22:7, those who were bidden (those who were called) were not worthy Matt. 22:8. If we fit Acts 28 into this framework the following result below is the consequence. Please see the exposition on John’s gospel for additional information, the series on Acts (soon to be created) and the Acts 29 topic here on rightdivision.com. 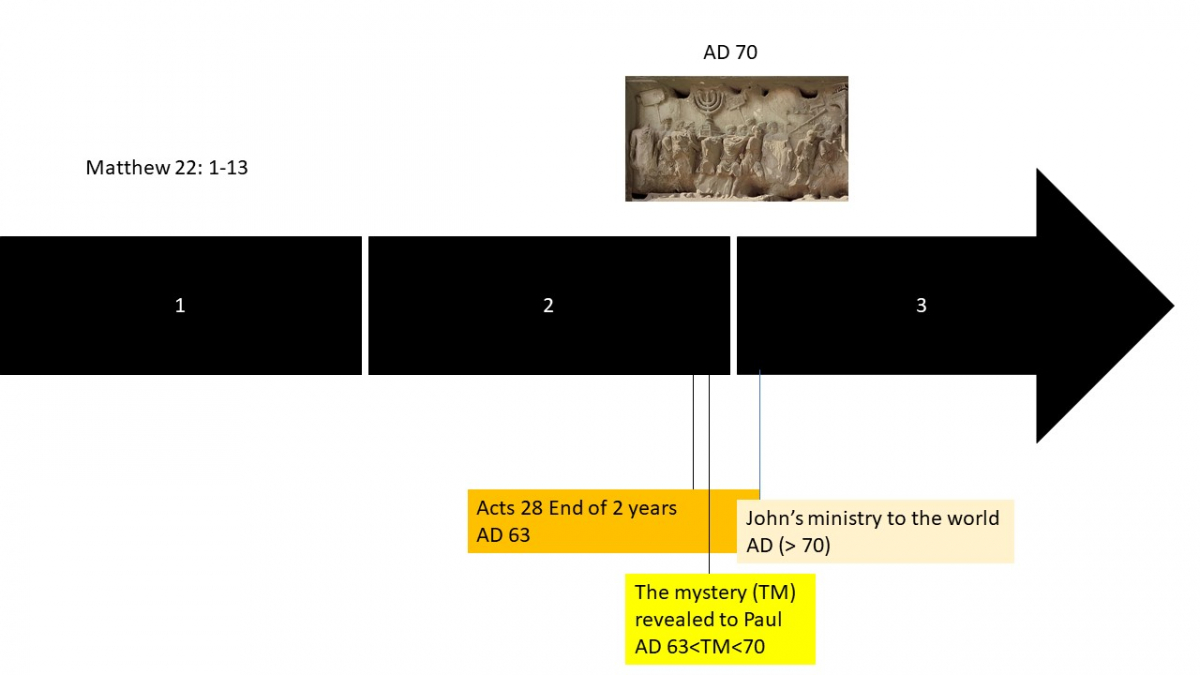 The move from Jew to the gentile is not with a new message but with the same. The Jews rejected the salvation of God —  Paul says the same message (“it”) will be sent to the Gentiles — the only difference is that “they will hear it” — their ears will be open unlike those of the Jews. What must be done to get something different is to read the Kingdom of God as proclaimed by PAul later (such as Col.4:11) into this earlier event.

All this means that “The Mystery” must come later. The subject of the “kingdom of God” contextually is the same and the 2 years Paul remains in his own hired house receiving all that came to him was accompanied with that same message of the kingdom as discussed in verse 23. We look therefore for a later time for when the mystery to be revealed and hence Acts 29. 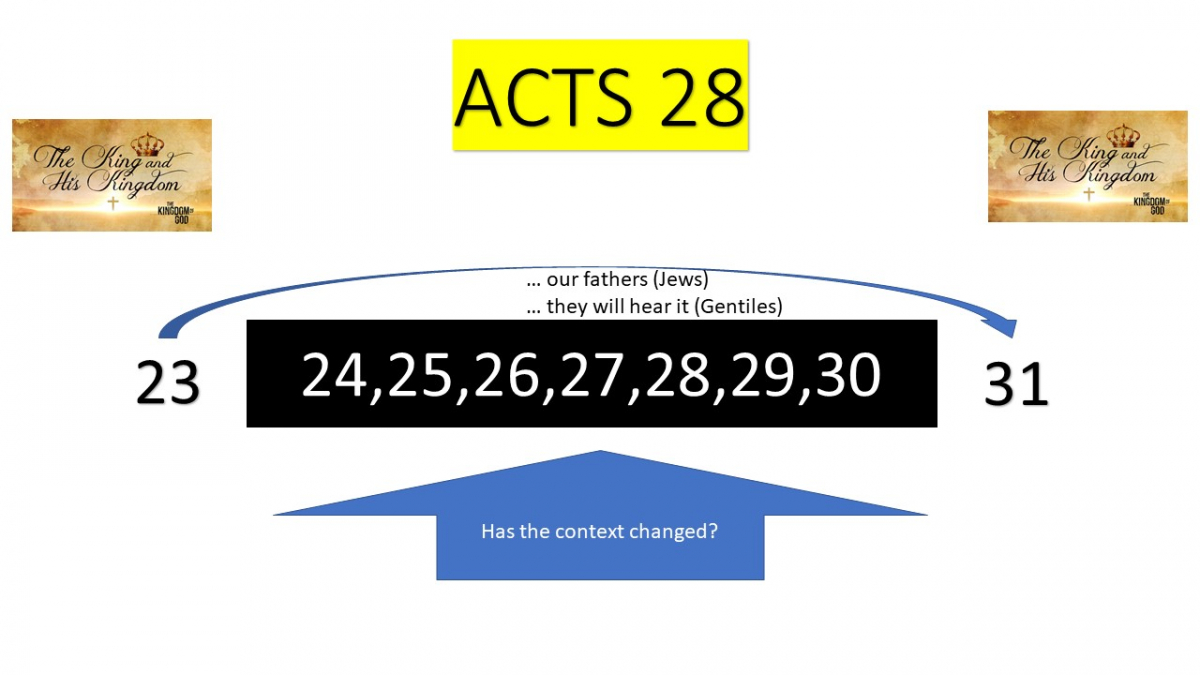 There are many consequences to the appreciation of a dispensational landmark such as that taught by CH Welch and others but there are additional results, explanations, and expositions when we come to understand more precisely where the boundary falls. Fortunately, we can retain nearly all of the formerly held results and in some cases refine them. So what are some uniquely Acts 28(29)  results if we allow for the adjusted timeline?

The first item I would like to look at is the placement of the mystery (TM) somewhere after the end of Acts 28:31 and before AD 70 and therefore entirely within the second calling to Israel to come to the wedding (see picture above).

4 Again, he sent forth other servants, saying, Tell them which are bidden, Behold, I have prepared my dinner: my oxen and my fatlings are killed, and all things are ready: come unto the marriage.
5 But they made light of it, and went their ways, one to his farm, another to his merchandise:
6 And the remnant took his servants, and entreated them spitefully, and slew them.
7 But when the king heard thereof, he was wroth: and he sent forth his armies, and destroyed those murderers, and burned up their city. (Matt. 22:4-7 KJV)

That is, when the mystery was revealed to PAul the prisoner, the second calling to Israel was still active though closing, all things were ready but they were making “light” of the invitation. We should expect therefore that signs and wonders would be present and that the second advent be a possibility and even close at hand since the Lord’s parable included three phases and the third was about to begin. The other feature that we should consider is that a number of Acts believers who had known only the hope of Israel as presented by Paul and other apostles with miraculous signed gifts accompanying needed an adjustment. Upon hearing the prison ministry of PAul they had to contend with a new adoption and associated inheritance in the super heavens. What would make them consider the apostle’s gospel of the unsearchable riches of Christ if with this new and hitherto unheard hope and message of the mystery there was no empowerment of the Holy Spirit? We should not be surprised then to see the following in PAuls latter ministry and specifically his instruction to those given the responsibility to “adjust” the saints:

The above is a beginning and more light is likely to come as we follow the scriptures putting all tradition aside and re-examining Paul’s epistles in the light of the great and trustworthy principle of right division.

We will be putting the microscope to the book of Acts soon in a series of studies with the hope that we can pin down the events of Acts with the dates of secular history.

From the Study: Acts 29 – Paul’s Latter Ministries and Journeys