The end of the book of Romans is often used as a “proof” that the mystery given to Paul the prisoner was known before the close of the book of Acts and that “the mystery” as revealed in Eph 3 is simply a rehearsal of what was already dispensed in the acts period. This is a part of the mid-acts foundation, an assumption that is demonstrably wrong, upon which many false doctrines subsist.

Here is the passage:

KJV  Romans 16:25 Now to him that is of power to stablish you according to my gospel, and the preaching of Jesus Christ, according to the revelation of the mystery, which was kept secret since the world began, 26 But now is made manifest, and by the scriptures of the prophets, according to the commandment of the everlasting God, made known to all nations for the obedience of faith: 27 To God only wise, be glory through Jesus Christ for ever. Amen.

This is an interesting expansion and cascading development of the explanation of the work of God in establishing the Roman christians. Notice the use of kata (according to) , it is the middle expression that we must loook at. To help us understand the verse lets review the grammatical structure through a Leedy diagram of the verses. The important portion to look at is the elaboration of thought concerning the mystery (musterion). 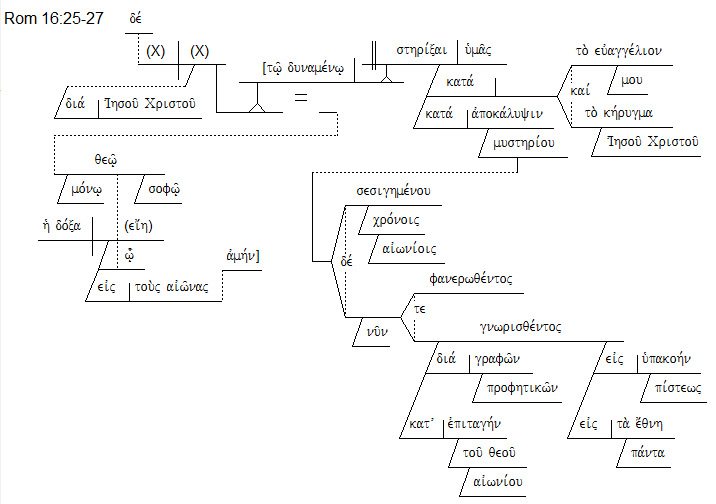 The word μυστηρίου is a neuter singular noun  in the genitive case. The participles σεσιγημένου, φανερωθέντος and γνωρισθέντος agree with it — reminding us that a mystery (no definite article) had been hushed in age times but now has been made manifest and made known through prophetical scriptures “διά τε γραφῶν προφητικῶν” the word “προφητικῶν” is an adjective and therefore modifies the noun “scriptures” — there are two items that work together to reveal this particular mystery:

A mystery was manifested and made clear by direct revelation given to Paul BUT this was also explained through prophetical scriptures. The adjective “prophetical” is used in one other place:

Peter was concerned that before his exodus from this world he would deliver a record that would enable the jewish christians to always have an informative and well grounded remembrance of prophetical truth. The point was that they were not constructed myths but came from eyewitness accounts and further that his inspired writing was more sure ” ἔχομεν βεβαιότερον τὸν προφητικὸν λόγον (2Pe 1:15 TBT)”  specifically ” a more sure prophetical word”. This ties in nicely with the ministry that Peter had begun with the Lord as an eyewitness of his majesty. The prophetical word was NOT “the mystery” kept secret from generations as Paul received Eph 3:1-9 , Col. 1:25-27. Peter was ministering PROPHECY not “the Mystery”. So too here in Rom 16, Paul explains this particular mystery from the PROPHETICAL scriptures made especially clear through the revelation given to him.

The mystery of Rom 16 takes us back to the one man Adam and shows that all (Jew and Gentile) can be saved the same way (inner teaching of Romans). This is seen best by examining the structure of Romans and thus appreciate the scope of the passage before us. 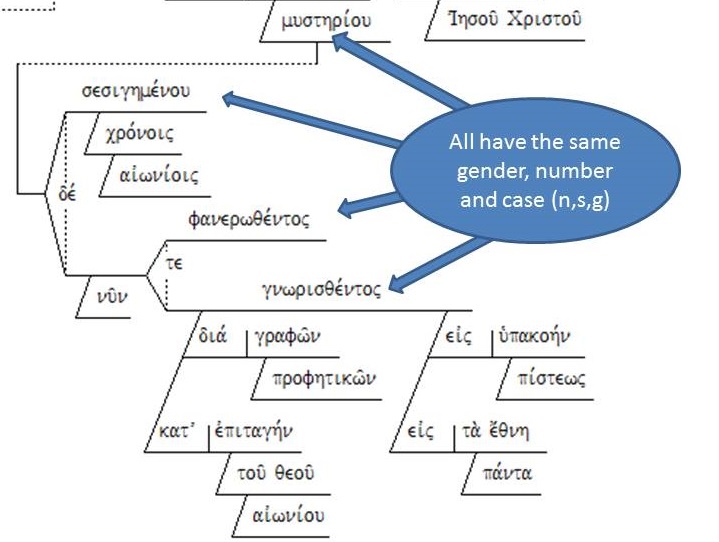 The main points are:

The apostle Paul was inspired and was in a place before God to reveal through both revelation and previous scripture to bring to the surface that which was hid in the OT.

This is vastly different to the revelation of THE MYSTERY hid in God, revealed to PAul the prisoner, unsearchable in prophetical scriptures and given post Acts 28.

Share
Categories: Uncategorized
Topics: Mid-Acts, My Gospel
Back to Blog