Mid Acts and the Slippery Slope

Those who fail to discern the Acts 28 boundary and start the un-evolved, created Church in mid Acts are destined to fight the Acts context while attempting to harmonize the ordinances (traditions) then present with the age in which we live where none of these signs, wonders and traditions have any place. Reality and substance along with shadow were present in the time when Jew was first Rom. 1:16,17. This is especially clear in 1 Corinthians (see First Corinthians study):

The slippery slope is what you are on without discerning the things that differ. Further once in Acts and believing a mid Acts start to the church you must now juggle the traditions and doctrines mentioned above for Paul says to those IN THAT AGE:

We must ask “if the Corinthians were to follow Paul in the same way that Paul followed Christ — what was Christ demanding of Paul?”

The above passage reminds us of what Christ was doing during his departure from the earth — “to receive for himself a kingdom and to return” — Peter gives more light on this in Acts 3:19f

19  Repent ye therefore, and be converted, that your sins may be blotted out, when the times of refreshing shall come from the presence of the Lord;
20  And he shall send Jesus Christ, which before was preached unto you:
21  Whom the heaven must receive until the times of restitution of all things, which God hath spoken by the mouth of all his holy prophets since the world began.

The kingdom long prophesied was in view with the covenanted people, the nation of Israel. Paul was labouring as a minister of the new covenant 2Cor.3:6 and using the Gentiles to provoke Israel to Jealousy Rom 11. Instructions from the Lord for the Acts occupation were given with signs and wonders and ordinances (traditions) 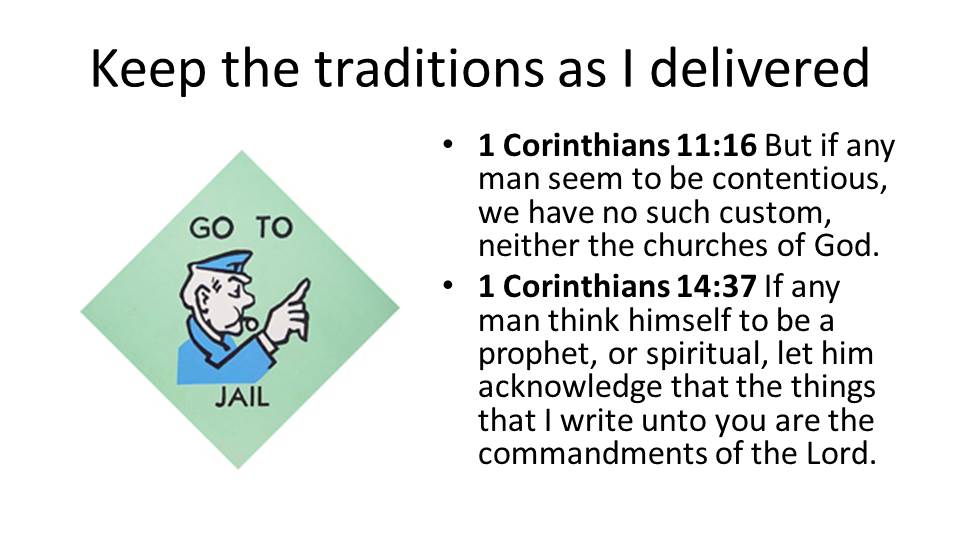 Seeing only this and NOT the ACTS 28 boundary will put the believer in jail! For these traditions etc were “the commandments of the Lord” the one waiting for the repentance of Israel and ministering the new covenant given to Israel.

Mid-Acts Jail: The end of the slippery slope!

If you fail to observe the Acts 28 boundary — a form of Jail awaits you! For you will either hold the head and observe the doctrines from the head of the church or you will hold to an admixture and attempt some form of reconciliation from the mind of man.

Mr 7:8  For laying aside the commandment of God, ye hold the tradition of men, as the washing of pots and cups: and many other such like things ye do.

Mid Acts is a jail of observance either to the tradition of men or the shadowy ordinances of God taught by Paul the minister of new covenant in Acts while giving advantage to the nation of Israel. As long as you occupy that jail you  will have to lay aside the pure and unfetted doctrines of Grace brought to us by PAul the prisoner and not hold the head.

Not Holding the Head

The book of Colossians is a prison epistle, it was written by PAul the prisoner. Here under God’s inspiration PAul teaches us the reality and substance with all traditions (ordinances) set aside as shadows and warns against being judged and misguided by men and doctrines which are shadowy. The antedote to the shadows is to HOLD the head

Col2:16 ¶  Let no man therefore judge you in meat, or in drink, or in respect of an holyday, or of the new moon, or of the sabbath days:
17  Which are a shadow of things to come; but the body is of Christ.
18  Let no man beguile you of your reward in a voluntary humility and worshipping of angels, intruding into those things which he hath not seen, vainly puffed up by his fleshly mind,
19  And not holding the Head, from which all the body by joints and bands having nourishment ministered, and knit together, increaseth with the increase of God.
20  Wherefore if ye be dead with Christ from the rudiments of the world, why, as though living in the world, are ye subject to ordinances,
21  (Touch not; taste not; handle not;
22  Which all are to perish with the using;) after the commandments and doctrines of men?
23  Which things have indeed a shew of wisdom in will worship, and humility, and neglecting of the body; not in any honour to the satisfying of the flesh.

To HOLD the head is to hold to the doctrines that are sorced from the head. These are in contrast to the surrounding shadows, traditions and ordinances which are all to perish with the using. 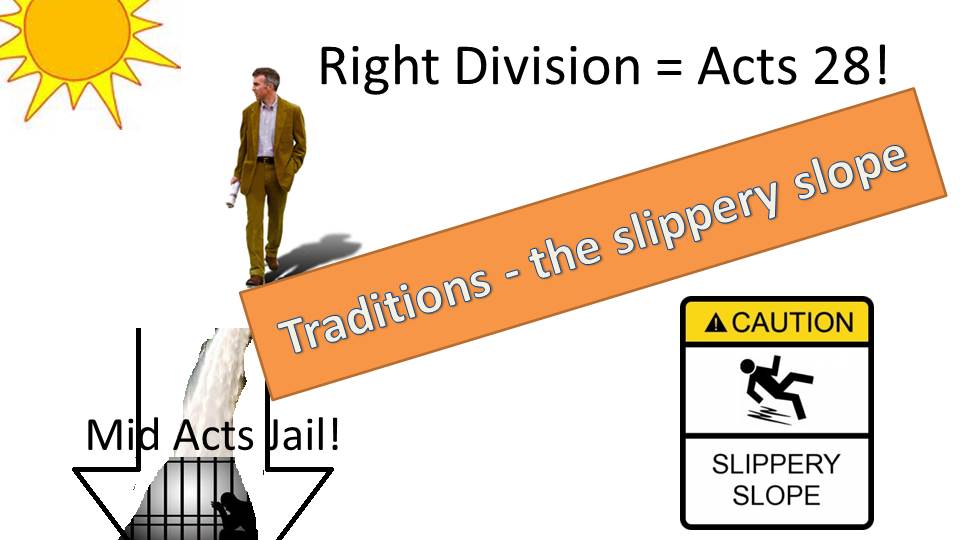 Those who follow the traditions of men and “hold” to a mid-Acts start to the church for which Christ is head will have a hard time being consistent with the manifest traditions that are clearly employed in Acts.

The clarity of this comes only in observing the age begun when Israel blasphemed the Spirit of God Acts 28:28 and the Mystery revealed to PAul the prisoner.