You assume that everything is just A OK and then everything changes! That’s the “But Now” experience. It manifests its influence in various ways and interesting contexts. 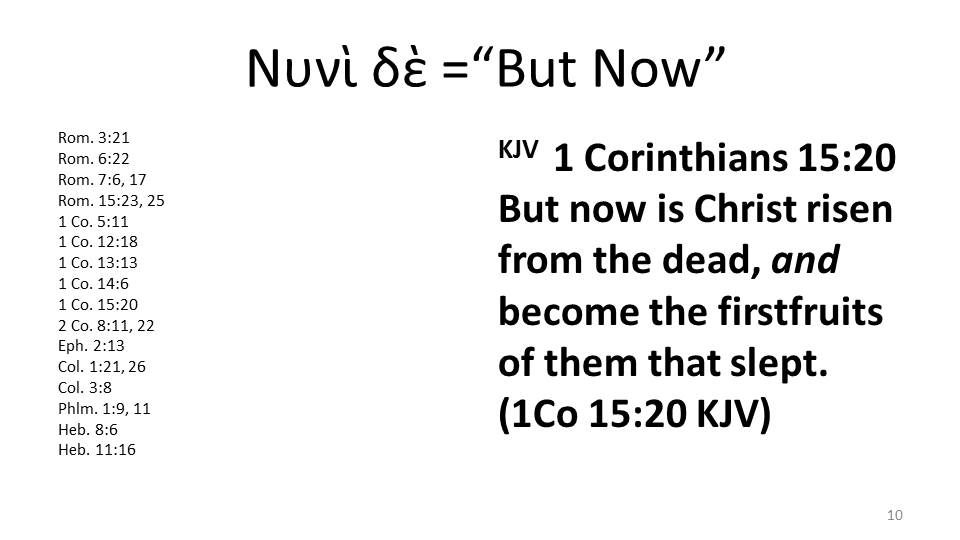 For many years I taught that the Body of whom Christ is head was just a local Ephesian body, one like unto  the bodies of Rom 12 and 1 Cor 12.

Then Acts 28 happened, or at least my appreciation of Acts 28 — a lot of things changed — I was moving along in my understanding of the scriptures under an incorrect assumption, then a  “BUT NOW” event happened – a new vista and a new hope erupted into view. Once again the Bible proved itself to be a wonderful and living companion never to be taken for granted!

The above two fellowships were local and contextual to the Acts administration — signs, wonders and the hope of Israel under the terms of the new covenant (given to Israel). A new and universal church for all those who want it is now available.

The question is: Are you open to God’s word as He speaks to us all through the pages of the Bible rightly divided?

A selection from a concordance of the expression “but now” or ” νυνὶ δὲ” is discussed below:

There was a clear manifestation of the doctrine of salvation by grace that came to the world through the preaching, teaching and pen of Paul – this manifestation was necessary to clarify what was latent within the scriptures. Indeed the law and the prophets gave witness to the veracity of Paul’s message.

To the jews this was truly a change from what was taught under the law, they needed an adjustment which often happens when a “but now” happens:

KJV  Deuteronomy 6:25 And it shall be our righteousness, if we observe to do all these commandments before the LORD our God, as he hath commanded us.

Further to the Jews under the added false teaching of the Pharisees (see Luke 14:1-16:31, https://rightdivision.com/blog/rich-man-dives-latin-and-lazarus) and those among the Gentiles who all their lives were attempting to appease a wrathful god through their dead works this revelation would be an “aha” moment and for many today it still is!

This is a message to the saved — BUT NOW — that is once salvation has come, the believer is free from servitude to “sin” and made a servant to God. No longer looking toward the possibility of salvation but looking back on the finished work of Christ he being adopted into the family of God seeks to please his new master with fruit unto holiness – separated from the sin that so easily besets knowing that at the end the ultimate is reached — everlasting life — no more death only resurrected life in an immortal condition. Life is conditional!

KJV  Romans 7:6 But now we are delivered from the law, that being dead wherein we were held; that we should serve in newness of spirit, and not in the oldness of the letter.1
TBT  Romans 7:6 νυνὶ δὲ κατηργήθημεν ἀπὸ τοῦ νόμου, ἀποθανόντος ἐν ᾧ κατειχόμεθα, ὥστε δουλεύειν ἡμᾶς ἐν καινότητι πνεύματος, καὶ οὐ παλαιότητι γράμματος.

What freshness is brought to us now? Deliverance! But more – not only do the Roman believers find deliverance from the law but learn “ἀποθανόντος ἐν ᾧ κατειχόμεθα” “that being dead in which we were held down” — the law is now revealed as dead — death is the cessation of life — it was alive and demanded adherence – BUT NOW the believer finds himself delivered and that which held him DEAD!! They could now look forward as a consequence or result that their new servitude was in newness of spirit not oldness of the letter. That is they were under new instructions and a new administration – the new covenant was to be their law.

No Longer I But Sin

KJV  Romans 7:17 Now then it is no more I that do it, but sin that dwelleth in me.
TBT  Romans 7:17 νυνὶ δὲ οὐκέτι ἐγὼ κατεργάζομαι αὐτό, ἀλλ᾽ ἡ οἰκοῦσα ἐν ἐμοὶ ἁμαρτία.

Sins are no longer down to the “I” — for it is no longer I that liveth — but the old nature “sin” that must remain with us till death and resurrection after that.

Christ was dead but then rose and is alive for evermore — so we also can come up in resurrection — otherwise we would perish and have no chance of everlasting life. Only Christ has immortality — we do not. Our lives will end and at some time in the future God will raise us up.

Brought Near once Far Off

The Gentiles were far off — they were strangers from the covenants of promise BUT NOW — through Christ’s sacrificial death were brought nigh. This was not by an unnatural graft as in Rom 11 but by a fresh creative unprophesied act of the almighty.

KJV  Colossians 1:21 And you, that were sometime alienated and enemies in your mind by wicked works, yet now hath he reconciled
1 22 In the body of his flesh through death, to present you holy and unblameable and unreproveable in his sight:
TBT  Colossians 1:21 καὶ ὑμᾶς ποτὲ ὄντας ἀπηλλοτριωμένους καὶ ἐχθροὺς τῇ διανοίᾳ ἐν τοῖς ἔργοις τοῖς πονηροῖς, νυνὶ δὲ ἀποκατήλλαξεν

This secret was given to PAul the prisoner and from him to us — it is unrevealed in the old testament and we need to come to PAul’s prison epistles to obtain knowledge of its contents.

KJV  Philemon 1:11 Which in time past was to thee unprofitable, but now profitable to thee and to me:
TBT  Philemon 1:11 τόν ποτέ σοι ἄχρηστον, νυνὶ δὲ σοὶ καὶ ἐμοὶ εὔχρηστον,

PAul’s son in the faith, begotten in his bonds, Onesimus was in time past unprofitable to Philemon but now the situation has changed. This is what can happen to all of us who heed the “But Now” teachings of the scripture in the context of right division. When we see the prison ministry we can be changed — born through the teaching that is available to us through PAul’s prison books — we can become profitable.

Christ was given a more excellent ministry than the shadowy priestly offices given to the Levites — He, in the Acts period was a mediator of the new covenant. Today, those who receive the gospel of the unsearchable riches of Christ see a greater ministry of Christ — that of the Head!

KJV  Hebrews 11:16 But now they desire a better country, that is, an heavenly: wherefore God is not ashamed to be called their God: for he hath prepared for them a city.
TBT  Hebrews 11:16 νυνὶ δὲ κρείττονος ὀρέγονται, τοῦτ᾽ ἔστιν, ἐπουρανίου· διὸ οὐκ ἐπαισχύνεται αὐτοὺς ὁ Θεός, Θεὸς ἐπικαλεῖσθαι αὐτῶν· ἡτοίμασε γὰρ αὐτοῖς πόλιν.

The patriarchs new that there was something better for them and though living in the land they looked for a city that hath foundations! So we see a better country a super heavenly which will require a better resurrection.