Acts 29: Applying the microscope to Acts 28

“No pain no gain!!” The modern response to this phrase is sometimes “No pain no pain” — the point is why go through pain — is the gain worth it? In the case of reviewing and examining those things which we believe while painful will often be very fruitful because biblical doctrines will often be dependent on each other. Truth is important and when it comes to a systematic or schema we need to get it right. The pain is worth it!

In this blog we will look at the meaning of the systematic I am suggesting, which is a work in progress and will be adjusted as time and study goes by. 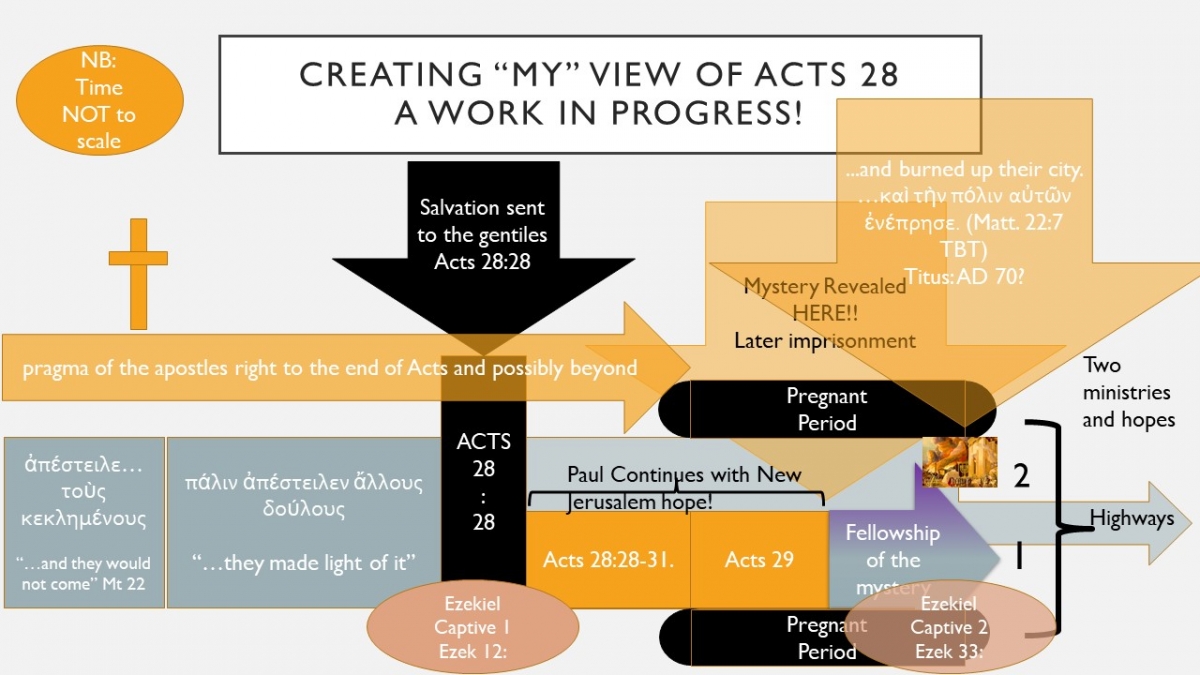 This passage informs much of the schematic above (gray and light gray) and is important because it reveals from the Lord’s own statements:

The parable (given to reveal the mysteries of the kingdom of heaven) is essentially a prophecy of what will happen when Israel is found to be unworthy. This is “practical” or de facto since an unworthy one is someone who does not produce the necessary deeds. Once Jerusalem is burned a new audience is brought into focus BUT the message is the same!!

At the end of the book of Acts the last verse states:

31 Preaching the kingdom of God, and teaching those things which concern the Lord Jesus Christ, with all confidence, no man forbidding him. (Acts 28:31 KJV)

The last clause “no man forbidding him.” continues through time until Paul is revealed the mystery at which time a new age emerges.

This occurs after Acts 28. See the black stretched “period” in the schema above.

This part of the diagram where two ellipses are pictured at the bottom is where there is a parallel appealed to from the old testament scriptures. The final temple abasement under Nebuchadnessar was preceded by a number of captivities and besiegments. Acts 28 is significant and a boundary because it is like a judgment along the way to the final one. The last ellipse relates to where the temple was finally sacked.